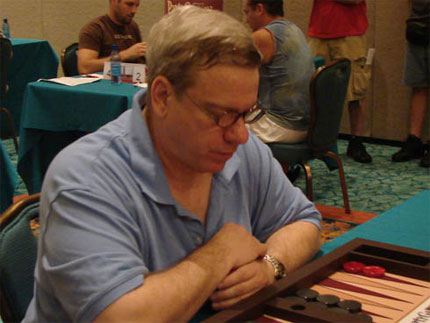 Paul began playing backgammon in 1978. He has been voted to the Giant-32 List every time since its inception in 1993 and he is currently ranked #13. Paul is a member of Mochy's Under 4.0 Club. He is the only person who has won backgammon tournaments on five continents (all but Africa and Antarctica). He has also given lessons and seminars on five continents.

With Nack Ballard, Paul co-authored the ground-breaking work on opening theory, "Backgammon Openings, Book A", published in 2007. Over the last three decades he has also written countless articles, which have been published in more than a dozen venues. Paul's hobbys include the piano and travelling. He has visited all 50 states in the USA and 60 countries. Paul has played live backgammon in 36 countries.

Paul won a tournament in Baden, Austria in 2010 and another in Portugal in 2011. He was a semi-finalist in the Monte Carlo World Championships in 2011 and he won the Vegas Super Jackpot in 2012. His GridGammon nickname is peever.