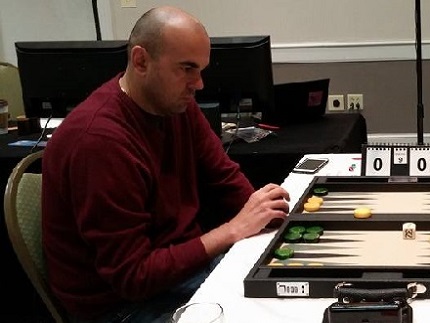 Victor Ashkenazi moved from Moscow to New York when he was 25, later becoming a USA citizen. Before switching to Backgammon in his late 20s, he was an accomplished chess player, with speed chess his speciality.He started playing backgammon in 1998 and within two years he became a much feared opponent amidst the thriving Times Square backgammon scene. He soon became an accomplished online player, reaching and maintaining high rankings on the major servers.

Victor has very high standard of play in live tournaments, as can be seen from his many streamed matches (over 75 to date). His notable wins include the Las Vegas Open in 2007, the NY Open in 2009 and 2012. In 2012, his best tournament year, he also won the Tampa Open and the Masters events in Las Vegas and LA. In 2015 he won the Carolina Masters.

In 2013, he was voted onto the 32 Giants List for the first time reaching #11. In 2013 he was selected for the World vs. Denmark annual event and has been a member ever since. His GridGammon nickname is Vic.