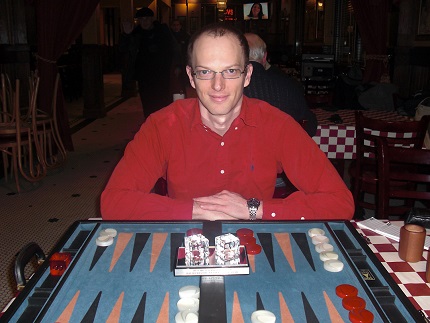 David Presser was born in Tel Aviv, Israel in 1980. He grew up as a chess player and became a National Master by the time he graduated high school. David took his first serious leap into backgammon at the local Chicago Bar Point Club in 2012, while studying for his masters degree at Northwestern University. Today David is a highly respected, avid player, a reputable teacher and lecturer, and an active member and supporter of the BMAB and USBGF organizations with the goal of promoting the game. David has many major victories in the US including the prestigious Chicago Bar Point Club Championship in 2013 and 2015, 2014 Minnesota Masters Jackpot, and 2014 NY Metro Limited Jackpot. He intends to participate in international tournaments in the near future. His GridGammon nickname is DMP.