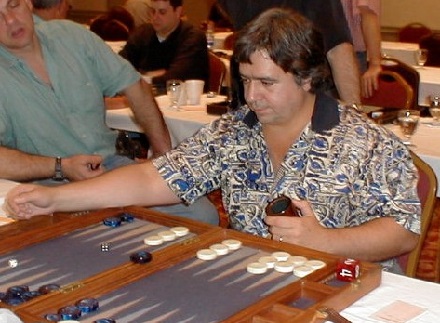 Neil Kazaross, who resides near Chicago, has been at the forefront of backgammon achievement over most of the four decades since he first started playing competitively in the later 1970s. He is justifiably famous as both an outstanding player and leading analyst.

Neil has won countless trophies both in and outside the USA. Perhaps his most notable achievement has been winning the prestigious ABT first place prize on six occasions (1994, 1999, 2005, 2008, 2012, and 2013). He has won 17 ABT tournaments overall, an astonishing record.

Neil has made major contributions to the science of backgammon, particularly in relation to Opening Theory and Match Equities most notably through his formulation of “Neil’s Numbers” and his seminal collaborative work with David Rockwell, using the power of modern bots to construct a modern Match Equity Table. He has co-authored a couple of backgammon books and has been a contributor on several others.