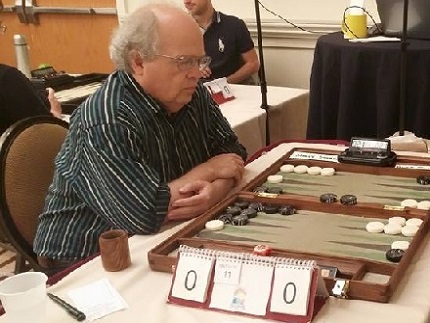 Marty Storer lives in the northeastern USA. He has played since 1975, starting in New York and Canada and winning his first big tournament in Ottawa in 1983. He won the inaugural American Backgammon Tour, and won two ABT tournaments in 1994. By 1995 he was ranked 13th on Kent Goulding's International Rating List. For many years he played relatively rarely, but is now more active. He has been among the top 32 Giants of Backgammon three times and was #40 in 1995. He is a three-time champion of the New England Backgammon Club. He won the 2015 Michigan Summer Championship and the 2015 U.S. Backgammon Federation Eastern Championship, and the Boston Masters in 2019. He played on the winning U.S. team in the 2020 Magriel Cup against the U.K. He wrote the acclaimed two-volume "Backgammon Praxis" (2005) featuring matches of Malcolm Davis, and co-authored a book of middle game strategy, "What's Your Game Plan?", with Mary Hickey (2011). He serves on the USBGF Board of Directors. He is Executive Editor of the game’s premier publication, "USBGF PrimeTime Backgammon", as well as a frequent contributor.