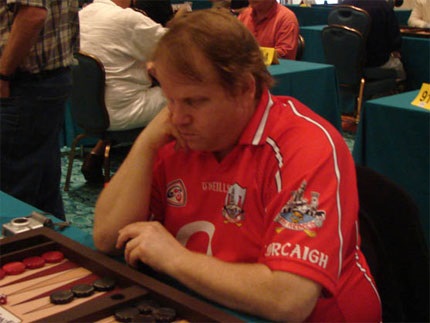 Steve Sax was born in St. Louis, Missouri in 1960. He played his first backgammon tournament in 1976 at age 15 and won his first major tournament in Louisville, Kentucky in 1983. He has won 24 titles over the years including ABT main events or consolations, jackpots and club championships. His two most notable victories were his 2000 Grand Crystal Beaver victory over Nack Ballard and his win in the Giants Invitational in 2011 over "Falafel".

He also has had the honour of playing and winning 10 doubles tournaments most notably the World Doubles Championship in 2006 with partner Brian Zembic. In 2002 he won the ABT championship. Steve has also been voted to the "Giants of Backgammon" list seven consecutive times beginning in 2001 and has reached a ranking as high as 6th.

As well as backgammon, Steve enjoys to play bridge, gin rummy and poker all of which to much lesser degrees of success than backgammon. He currently resides in Los Angeles, California where he competes, teaches and writes about backgammon. You can find him at GridGammon often playing under the name of STEAMSAX.