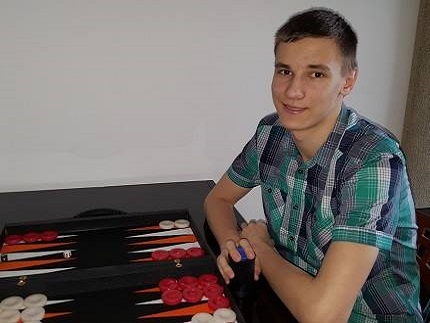 Zdenek Žižka was born in Prague in the Czech Republic in 1998. He started to learn backgammon at the age of 5, tutored by his mother, Eva Žižková, also a very talented backgammon player and BMAB master. Zdenek studies at a specialist mathematics high school in Prague. He started taking Backgammon seriously in 2014, winning his first international tournament in Cyprus, in the intermediate division. In 2015, he had played at championship level player, winning the super jackpot in Zagreb and being runner up in the superjackpot in Sibenik, besides winning the PR prizes in BMAB tournaments in Schwaz and Prague. In 2016 he was runner-up in the last chance in Berlin, and again won the PR prize in the BMAB tournament in Vienna. Throughout 2015 and 2016, Zdenek has shown himself to be amongst the strongest players at the Backgammon Club Munich, winning the Monthly Championship in 2016. He has also had great success in the USBGF Online tournaments winning close to 67% of his matches and winning the Masters Divisional IV event in 2015.

In 2016, he was selected to play in the prestigious World vs Denmark event held annually at the Nordic Open. His Gridgammon nickname is XZet24.