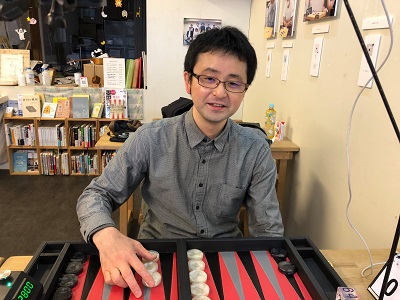 Daisuke Katagami was born in Hiroshima in 1981. A graduate of Tokyo University, he is famous as a professional Shogi player. He started Backgammon as a university student, and regularly played with Takumitsu Suzuki and Akiko Yazawa, both of whom later became World Champions. No doubt this experience contributed to him winning his first national title, "Oui", in 2005 at only 24 years of age. He went on to win the world team championship in Monte Carlo 2011, before taking a break from the game. He returned to backgammon recently, determined to improve his PR. He attacked BMAB, quickly achieving the title of Grandmaster, Class 3. He has since collected two more national titles, including the "Saiou" in 2020. He was a member of Japan's national team in Monte Negro in 2019.