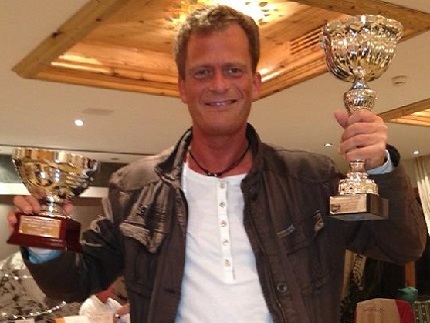 Frank Simon, born in 1965, played his first chouette in Thailand in 2004. After winning a satellite tournament, he finished his first international tournament, the Thailand Open, as Runner-Up. Later in the same year, he reached the final in the 16th European Backgammon Championship 2004.

After taking a break, he started playing international tournaments again in 2010 reaching the Quarter Final when playing the Nordic Open for the first time. In 2011 he won the Super-Jackpot in Cyprus in the European Pro Backgammon Championships, was Runner-Up in the 2nd Consolation in Monte Carlo and won the Super-Jackpot in the Buki Memorial Georgian Open. In 2012, Frank won the Thailand Open, and was Runner-Up in the German Backgammon Masters and the European Championship in Velden. In 2015, he was Runner-Up in the German Backgammon-Masters. His online successes include first places in the EBIF Three Lives Open, EBIF Open, EBIF European Cup 2014 and the USBGF Masters Divisional VII.

He has often been the leader of the German Elo-ranking list, and currently he is starting out as a backgammon teacher. His GridGammon nickname is pattayastyle.