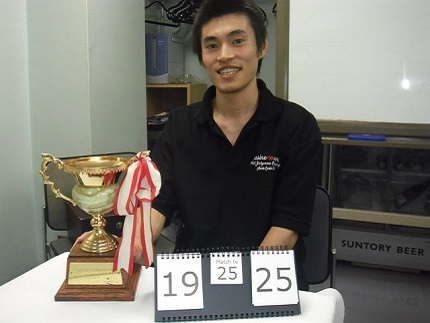 Yoshiyuki Nakamura, born in 1988, is a semi-professional backgammon player who lives in Tokyo. Besides playing he also teaches and tutors many students, and regularly promotes, organises and directs backgammon tournaments and events.

He is the most successful player from the highly prestigious U25 Group, a project to find, train and fast-track, the best young players in Japan, directed by Mochy and supported by the Japanese Backgammon League (JBL). He is consistently in the top 10 on the JBL rating list.

He has already won the very prestigious national title “Meijin” (Master) on two occasions. All rounds in the "Meijin" title are 25 point matches. He joined Mochy’s Under 4.0 Club in 2014.

He started to play on the International Backgammon circuit in 2014, where he is likely to make a big impact soon. His GridGammon nickname is yosiyuki.