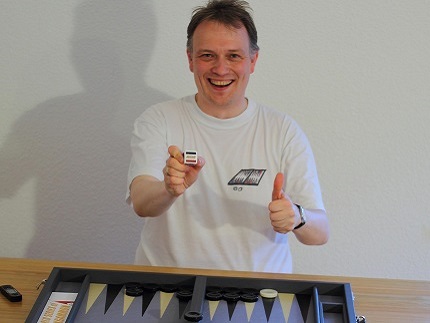 Bernhard, born in 1969, learned the game at the age of 14 during a vacation on a small Greek island. His teacher, his Greek landlord, was known as the Backgammon King of the Island. They played for ice cream, and Bernhard usually lost. Back home, he studied the game seriously and managed to slaughter the "King" two years later!

During the late eighties and early nineties he played successfully at many tournaments, culminating at the Backgammon Olympiad in Venice 1996, where he won the title in the Champions Class as well as in the Doubles Consulting event and finished second only to Paul Magriel’s Squad in the Teams event.

He then took a long break, concentrating on his family and job as a mathematician, but returned to the tournament scene some years ago, winning many local tournaments and leading the German Elo-ranking list for some time. He also won the WSOB Online Tour in 2012.

Bernhard has rarely been seen at international tournaments, but is planning to change this in the future! His Gridgammon nickname is "rosinabeck".