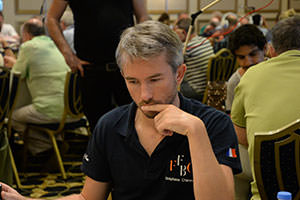 Gamer at heart and passionate about mathematics (associate professor at Jean Dautet high school in La Rochelle), he took a serious interest in backgammon in the early 2010s. In 2016, he reached the final of the French championship. He joined the French team in stride and won two bronze medals at the team world championships in 2020 in Forges-les-Eaux and in 2021 in Trier.

Individually, he won the super-jackpot in 2019 at the WBGF in Montenegro and the individual title WBGF in Trier in 2021. He has been working on the development of the game in France for several years with a Youtube channel and in 2021, he became president of the French backgammon federation.