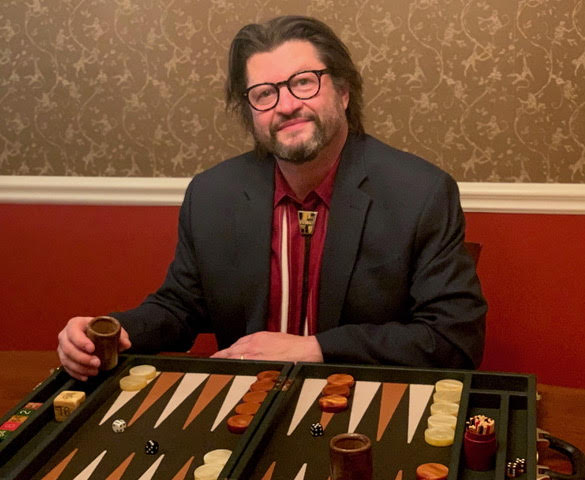 Albert learned to play backgammon in the 70’s as a teen at Lake Geneva Country Club in Wisconsin, enjoying social money games from an early age. Arriving in Boston in the early 90’s, he became a regular at New England backgammon Club NEBC tournaments at the Sheraton Commander and long summertime Harvard Square chouettes in a milieu that included a young David Wells. After a hiatus from the game in the early 2000’s, he returned to competitive play and the NEBC, becoming one of the organizers of the club after the passing of local ‘propmeister’ Herb Gurland. Despite all of this competitive pay, Albert only undertook careful study of the game and began venturing into the wider tournament scene outside Boston in 2015, where he has become a familiar face at the NY Metro, San Antonio, and Cyprus tournaments, among others.

Albert has contributed three well-received articles on “3rd-Roll Complexes’ to the USBGF PrimeTime Backgammon, as well as a treatise on opening replies, all with accompanying FilemakerGo! quizzing apps for the iPad, available on the NEBC website, which he maintains. An avid collector of vintage backgammon equipment and memorabilia, he has drawn attention to the beauty of vintage bakelite checkers and cubes by presenting a gallery of them on the site, as well as digital scans of backgammon-related articles and magazines.