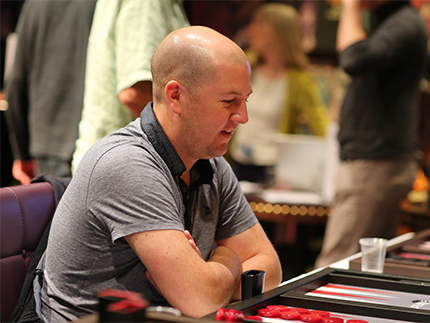 Gareth 'gaztafari' Owen was born in Ashford, England in 1979. He graduated in Pure and Applied Mathematics with honours from Exeter University in 2002 where he got his nickname, gaztafari, from his love of dub reggae.

He discovered backgammon in the staff rooms of casinos in his mid 20's and soon gave up his job when he realised there was more money to be made playing on his break than dealing roulette!

His notable win is Merit Park Open 2015.Gaz was also runner-up in the Consolation of the World Championships in Monte Carlo in 2013.

Gaz describes himself as a blitz middle game player. He can't wait for the advent of electronic boards as he detests pip counting. He also enjoys other games with a twisted luck element such as football, tennis and golf. In 2015 he set himself 4 goals; win a major tournament, get on the giants list, reach UK no.1 ranking and become a grand master. 6 months later, here he is. (photo courtesy of David Startin)