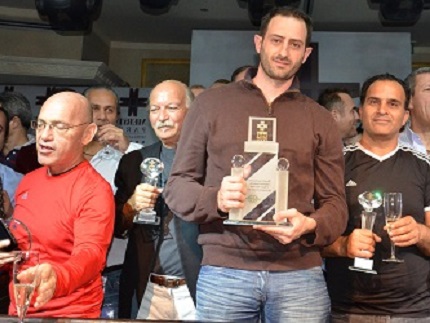 Born in 1981, Athanasios is one of a group of very strong Greek players. He appeared on the international backgammon circuit in 2013, cashing with third place in the Masters event in the European Pro Championship in Northern Cyprus.

He joined Mochy’s Under 4.0 Club in 2014. This achievement was quite dramatic because in the second match he played PR 12.4. Rather than quit the attempt he valiantly fought on in the remainder of the series and played well enough to meet the target. Later in 2014, he won the highly prestigious Masters event (from a field of 235) at the Merit Open in Northern Cyprus, and was also a semi-finalist in the Doubles Championship at the same venue.

In his short time on the international circuit Athenasios has earned a reputation for being a very intelligent and strong player, whilst also being exceptionally kind and modest; a perfect gentleman over the board and one of the most pleasant opponents to have. His Gridgammon nickname is afisikos.